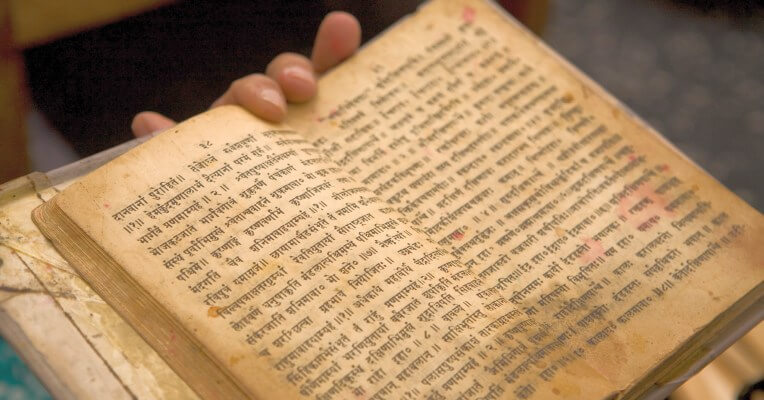 The īśa upaniṣad is a short Vedantic text appended to the śukla, or white, yajur veda. It is thought to be at least 3,000 years old (!) and was composed by the ancient sage Yajnavalkya. Containing profound yogic wisdom within its pithy 18 verses, the Isha Upanishad has been a perennial source of wisdom and enlightenment for generations of students, scholars and yogis.

Along with the Bhagavad Gītā, the Isha Upanishad was also a major source of inspiration for Sri Aurobindo, one of modern India’s greatest yogis, and had a profound influence on his teaching and method of sādhanā, or spiritual practice. There is some evidence that Sri Aurobindo’s philosophical magnum opus, The Life Divine, started out as a commentary on the Isha Upanishad.

What makes the teaching of the Isha Upanishad so compelling and insightful, even today?

For one, the Upanishad is extremely concentrated and concise, being composed of short, but powerful, statements of Truth born from the sage’s lived experience. There is no speculative philosophy for philosophy’s sake, but simple lucid statements which convey the power of intuitive spiritual knowledge and experience.

As far as the teaching contained within the Upanishad, there is an explanation of the deeper purpose and meaning of the manifested universe (All this is for the habitation of the Lord) and the text enjoins one to a life of meaningful engagement with the world (Doing verily works in this world one should wish to live a hundred years), as well as the conditions for engaging in the world and yet remaining spiritually free and detached (By that renounced thou shouldst enjoy; lust not after any man’s possession). And all this is shown just within the first two verses!

All this is for habitation by the Lord, whatsoever is individual universe of movement in the universal motion. By that renounced thou shouldst enjoy; lust not after any man’s possession.

Doing verily works in this world one should wish to live a hundred years. Thus it is in thee and not otherwise than this; action cleaves not to a man.

In fact, according to Sri Aurobindo’s commentary on the Upanishad, the central theme of the Upanishad is the reconciliation and harmony of fundamental opposites such as enjoyment & renunciation, action & freedom, being & becoming, God & Nature, and its 18 verses can broadly be grouped according to four main movements of thought:

It is no wonder then that the Upanishad is widely revered and holds a position of eminence within the Indian spiritual tradition.

We leave you with a few gems from Sri Aurobindo, paraphrasing the Upanishad, and hope you are inspired to study further the profundities of thought and spiritual experience contained therein:

To escape from grief, death and limitation we must renounce the world, to enjoy bliss, freedom & immortality we must possess ourselves in the Lord; but since His object in manifesting is habitation of the universe and not its destruction, the bliss must be enjoyed in this universe, through the Lord, and not in the Lord apart from and exclusive of life in the universe.

The ascetic gospel of renunciation is incomplete by itself; the Pagan gospel of enjoyment is incomplete by itself. Renunciation and enjoyment of the world must be reconciled by substituting inward for outward bliss, the bliss that goes from within outward for the pleasure which seeks to appeal from without inward, joy of God in the form & name of things for joy of the finite appearance and the isolated idea. The reconciliation is to be effected through the consummate experience of Ananda, the divine beatitude at which we arrive by true seeing in the kingdom of the pure Idea, satyadharmena drishtyá.

The possession of God in the world-transcending height of His being does not exclude possession of God in His world-containing wideness. To the liberated soul there is no high and base, but only one equal divine bliss and perfection.To live in the world is not necessarily to live in the duality of grief and joy. The soul seated in Ananda, even though it lives the life of the universe, possesses as its dominant principle unmixed bliss and can use in this world & this human life mind, life & body, sarvam idam, as instruments of God-enjoyment without enduring the dominion of their dualities.