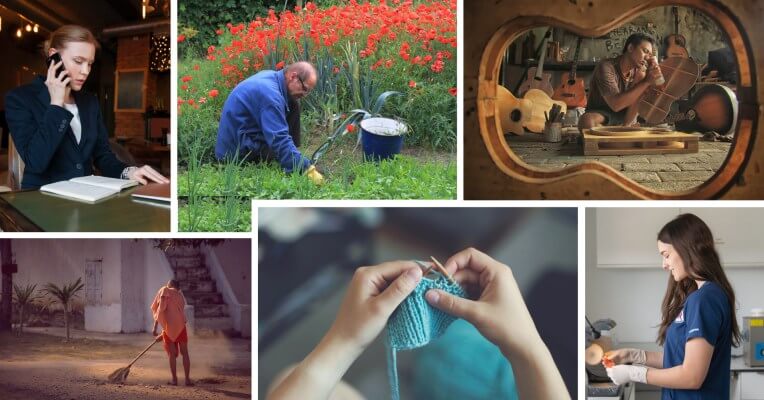 Yoga is a very broad term in Indian spirituality and while it is most often associated these days with haṭha yoga, the system of physical postures and breathing exercises and concentration techniques that many of us will have encountered in a modern yoga studio, there are in fact many different disciplines of yoga which each have their own particular approach and method and results, both spiritual and mundane.

Yoga is a Sanskrit term which comes from the verbal seed sound yuj, which has the meaning of uniting, joining, harnessing, applying and other related meanings. While the term is commonly explained by scholars to mean “union” (as in union with the spiritual principle of reality), it also connotes the method and means and disciplined effort to reach the goal, as when an ox is yoked (yukta) to a plough or a horse harnessed to a chariot to carry it forward.

Among the three, karma yoga may be in a way the most accessible, as there are no specialized practices or techniques which have to be practiced outside of one’s daily routine, since the special sphere of karma yoga is in one’s own daily work and action. It is therefore also the easiest to integrate into one’s daily life and easiest to maintain a continuous effort and practice. Though often misunderstood and looked down upon or considered inferior, karma yoga is a tried and true pathway to personal transformation and spiritual realization.

Though we often understand the word karma in the sense of the natural consequence of our actions, good or bad, or the accumulated spiritual merit of our good and bad deeds (from this life and beyond), karma in fact means primarily action and work. And though when we speak of work we mean most often our primary job or occupation, karma and consequently the domain of karma yoga, encompasses all action of whatever nature, large or small.

Although it is often confused with the concept of sevā, or selfless service, public charity or religious works, the practice of karma yoga is not confined to religious or charitable works only, as all types of work have their place in the grand scheme of God and Nature. Seva (or charitable works) may be a first approach or initial field where we learn to associate our works and actions with a spiritual principle, but afterwards this has to be extended to all our life and the work suitable to our nature and temperament, whatever it be.

It is not so much the nature of the work and its outer appearance, as it is the spirit and consciousness with which the work is done, the inner condition of the worker, that makes the difference in action and leads to spiritual progress.

According to the bhagavad-gītā, the primary scripture wherein the principal teachings of karma yoga are laid out, the nature of one’s work wherein karma yoga is to be practiced and realized, is determined by one’s own inner nature (svabhāva)and law of being (svadharma). According to a famous verse of the Gita:

One can see from the very circumstances of the Bhagavad Gita’s teaching, wherein Krishna counsels Arjuna to continue to fight with all his conviction in the Mahabharata war (and not to give in to misgivings of ahiṃsā, or no-violence), that works are not considered high and low or pure or impure according to their outer appearance (as warfare or violence is often considered unspiritual), but according to something more inner and subtle, discernible only to the awakened spiritual eye. And it is better to do the work dictated by one’s own inner truth of being, than to follow another’s truth and seek spiritual realization through pretense or imitation.

Renouncing the Fruit of Works

So what is the central method and discipline of karma yoga? According to the Gita, this lies in changing the central motive power which drives our work and action. Human beings generally act out of desire and attachment to the fruit of their work, be it enjoyment of wealth, power, success, fame, honor, position or other such motives. In practicing karma yoga we must renounce attachment to these ordinary motives and replace them by offering our work to the Divine in the simple spirit of service and surrender, unattached to any personal result, even spiritual.

By this training the bonds of our egoism (ahaṃkāra) are loosened and our consciousness can become liberated from its normal fetters. From small persons acting in the inconsequential rounds of ignorance (saṃsāra) we grow aware of a vast Divine reality which governs and orders the universe, whose humble instrument we may become.

Thus it becomes also possible to heal the division commonly encountered between the spiritual and mundane worlds, as life in all its diversity is seen to be the meaningful outflowing of a universal action with a Divine purpose which we can freely participate in, and not something separate from and contrary to spiritual consciousness and reality.

Abandoning slowly the attachment to life and action centred around our own small person and it’s cherished fruits, it is only natural that we should then develop a generous, caring and helpful nature which flows out freely to others. This is a sign of progress in karma yoga.

However, the idea of serving or helping others can also become an obstacle on the path and a subtle form of attachment, ambition and ignorance which also has to be overcome on the way to a more complete realization. Helping and serving others should only be in obedience to our true svabhava and svadharma, done without attachment and ambition, and subservient to our aspiration of service to the one Divine which all persons and beings imperfectly embody.

By this training we can overpass the subtle snare of ignorance which lies hidden in the natural and divine impulse of selfless generosity and helpfulness.

An Instrument of Divine Work

At an advanced stage of karma yoga, one may begin to conceive of becoming a progressively more perfect instrument of the Divine’s work in the world, be that as a pen, a hammer, a flute or a sword according to one’s true inner nature.

While the karmayogin is often conceived these days as the perfect servant or śūdra, according to the ancient system of caturvarṇa, enlightened action may take any of the four forms of the caturvarṇa, including the life and action of the sage (brāhmaṇa), warrior (kṣatriya), artist or businessman (vaiśya), and express any of the infinite qualities of the divine nature.

This then becomes the culmination and fulfillment of the karma yoga: the possession inwards of an enlightened spiritual consciousness in touch with Divine reality, liberated from all egoism and desire and attachment, and outwardly the many-sided purposive action of that same reality through the purified instrument of one’s own nature and law of being.

While the above represents only the most cursory and condensed introduction to karma yoga, a wealth of wisdom can be found on its practice in the Bhagavad Gita, one of the core texts of the spiritual tradition of vedānta.

And in the works of Sri Aurobindo, one of modern India’s most illustrious sages and proponents of the karma yoga laid out in the Gita, one can find additional lights and drops (or lightning-bolts) of wisdom, and a synthetic method which unites all three paths of the traditional trimārga on the way to a complete and integral yoga of self-perfection.