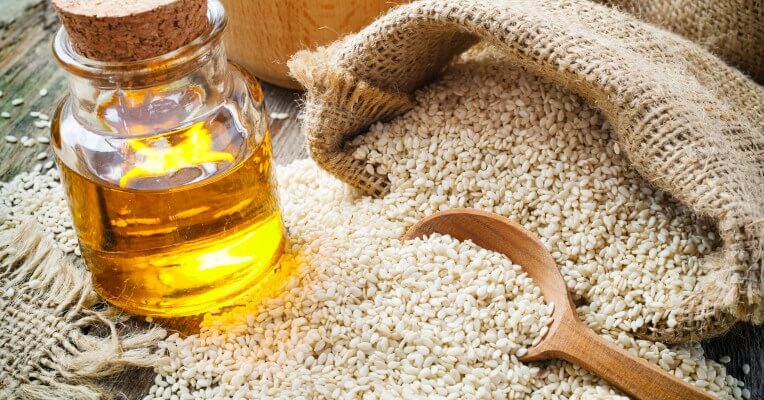 Sesame oil has a very ancient history of use in India, going back at least 5000 years. Sesame (Sesamum indicum, also known as tila in Sanskrit) is considered to be humanity’s oldest oil-bearing crop, and it is believed to have been first domesticated and cultivated in the Indus Valley civilization in ancient India. Sesame was favored due to the very high oil content of the seeds, its ability to grow in harsh climatic conditions, and the very high stability of the oil, which only goes rancid after a very long time.

While Sesame oil is known to Ayurveda and prized in India and in many other Asian cultures as a cooking oil, flavor enhancer and healthy ingredient in food, Sesame oil also is prized in Ayurveda for its use in body care routines and treatments, such as for massage, hair care, oral ‘oil pulling’ and as a base or carrier oil for therapeutic herbal preparations.

Sesame oil has natural antibacterial and anti-inflammatory properties, which combined with its natural ability to stay fresh over long periods of time, make it the premier general use oil for body care in Ayurveda. It is recommended often in the ancient texts of Ayurveda, such as the Sushruta Samhita and the Charaka Samhita. It is especially useful and pacifying for persons with Vata constitution or excess Vata, as it is considered to be very warming and nourishing. It is also known for its ability to be easily absorbed by the skin and its deep-penetrating and rejuvenating properties.

Sesame oil is considered in Ayurveda to be the best among oils for general massage (abhyaṅga). It is also often formulated with Ayurvedic herbal ingredients to enhance its therapeutic properties for the skin, muscles and joints (like in Auromere Ayurvedic Massage Oil, which contains 25 additional herbal ingredients). As Sesame oil is very warming, it is very helpful for massaging stiff muscles and joints. Ideally the oil should be warmed slightly before applying it to the body.

Sesame oil garners the same high respect in Ayurveda when it is used as a hair oil or in head-specific massage. Keeping the hair moist with oil is said in the Charaka Samhita to prevent headaches and premature baldness and graying, nourishing the hair, preserving its color and strengthening the roots. It is also often combined with herbal ingredients in Ayurveda, which increase its efficacy in treating and nourishing the hair. (See Auromere’s Pre-Shampoo Conditioning oil)

Oil pulling (called kavalagraha in Sanskrit) is an Ayurvedic practice using a spoonful of oil (Sesame oil is commonly preferred) as a kind of mouthwash. It is recommended to be done daily in the morning on an empty stomach before brushing one’s teeth. One tablespoon of oil is to be swished around the mouth and between the teeth for 5-20 minutes and then spit out. The oil should not be swallowed. Oil pulling is designed to ‘pull’ out bacteria and toxins (ama in Ayurveda) from the mouth, improving oral hygiene and giving fresh breath.

***With best wishes for your health and wellness from Auromere***