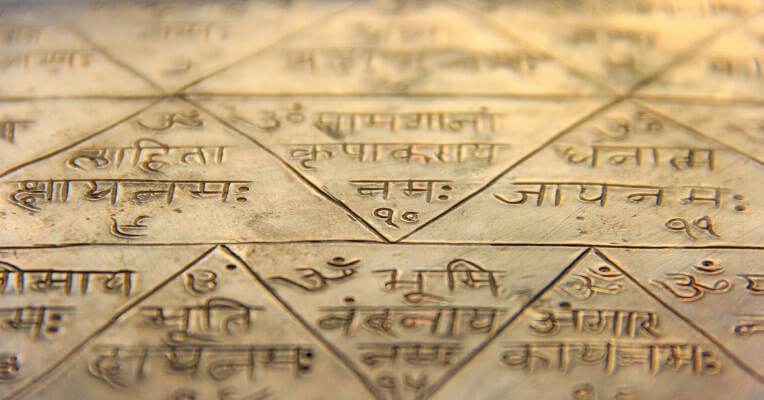 Ayurveda is an ancient system of natural holistic medicine from India, passed on to modern times and surviving through two main lines of transmission: the unbroken teacher-student (guru-śiṣya or guruparampara) relationship, and the traditional reference texts of Ayurveda, including the suśruta-saṃhitā, caraka-saṃhitā, aṣṭāṃga saṃgraha, aṣṭāṃga hṛdaya and others. Both of these methods of transmission (oral and textual) rely heavily, or entirely, on the medium of the Sanskrit language.

What makes Sanskrit an ideal vehicle for the transmission of Ayurvedic wisdom? For that we must first understand what is Ayurveda and how the system of knowledge was first discovered and framed. From there we will be able to understand its distinct character, which will naturally lead us to the understanding of why Sanskrit is an ideal medium for the preservation and transmission of the ancient Ayurvedic wisdom.

The science of Ayurveda is said to have been first revealed to the ancient sage Dhanvantari by Indra, the illumined king of the gods. Dhanvantari then framed the system of Ayurveda into eight branches, or limbs (aṣṭāṃga): Internal medicine, pediatrics, psychology, disease of the head and neck (eye, ear, nose, throat, etc.), surgery, toxicology, rejuvenation, and fertility.

This legend of the receipt of Ayurvedic knowledge by revelation describes in a simple manner how the Ayurvedic wisdom was discovered intuitively by the ancient sages (called ṛṣi),  who possessed an inspired and enlightened, intuitive consciousness. It is from this intuitive consciousness that the basic principles underlying human health and longevity were first discovered and the healing potencies of various herbs and minerals were individually discerned. Since the knowledge of the ancient sages in various branches of human learning were encoded in Sanskrit, naturally Ayurveda was also described in the rich, intuitive language of Sanskrit.

Sanskrit is considered to be a perfected language, with a natural cohesion and connection between the sound of the word (śabda) and its meaning (artha), framed in an intuitive manner and developing by certain natural and inevitable principles from a repository of root or seed-sounds (dhātu).

As Sanskrit is a flexible and intuitive language which preserves its connection with its underlying, highly suggestive seed-sounds, it is therefore ideal in expressing and transmitting Ayurvedic wisdom and knowledge which has the same intuitive origin.

As an example, let us take the word āyurveda itself. āyurveda is a compound word composed of two separate words, āyur (technically āyus) and veda. While veda is relatively straightforward, meaning “knowledge”, the word āyus is extremely significant to understand Ayurveda and its purpose and intention. āyus is commonly translated as “life”, which does not actually do the word justice as its meaning includes the important concept of longevity as well. It would be better to translate āyurveda as the “science or knowledge of longevity”, as imposed to the “science of life” which is how it is commonly translated, and that can only be known and the deep meaning or purpose of Ayurveda understood when there is sufficient understanding of the Sanskrit language in which these concepts are embodied.

This then invokes the whole spiritual tradition and outlook of India, alluding to a special passage in the Isha Upanishad (also in Sanskrit) which states that one should wish to live a full life (100 years) in this world doing selfless works. (Translation by Sri Aurobindo: “Doing verily works in this world one should wish to live a hundred years.”)

We then see, through the medium of a deeper knowledge of Sanskrit and the spiritual tradition of India, that Ayurveda is the science and method of longevity, for the purpose of helping human beings to live a long life at their highest capacity to contribute to the deep meaning and purpose of the universal movement.

And just as the understanding of Ayurveda as a whole is strengthened and correctly understood through a deeper knowledge of Sanskrit, so also are all the individual parts and intuitive concepts of Ayurveda better understood as well. This includes concepts like doṣa (literally “blemish”), vīrya (“herbal potency”), prakṛti (“individual constitution”), dhātu (“stratum”, or tissue type), agni (metabolic “fire”) and so many others. Sanskrit is the key which opens up the deeper intuitive meaning behind these terms, which defies translation and remains mostly inaccessible or obscured when translated into modern vernaculars like English.

For further reading and research we suggest: