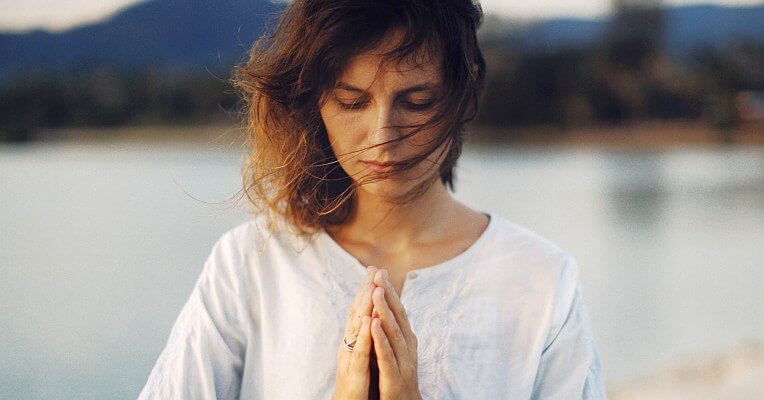 A mantra (मन्त्र) is a sacred sound, word or verse which vibrates with spiritual light, or jyotis (ज्योतिस्), and power, or śakti (शक्ति). While the most common mantra in the spiritual tradition of Yoga is the sacred syllable oṃ (ॐ), some mantras are inspired verses from the scriptures, like the gāyatrī mantra (गायत्री मन्त्र) which originally appears as a verse in the ṛg-veda (ऋग्वेद).

While a mantra is the sacred sound, word or verse itself, japa is the spiritual practice of meditating on and continuously repeating the mantra, either out loud or internally in the mind. Although any mantra can be used for japa, the best mantras for daily japa practice are made up of a few words only, and can therefore spring to mind on any occasion. One common form of japa is nāma-japa (नामजप), or repetition of the Divine name.

Mantra-japa and nāma-japa are spiritual practices which have a very ancient pedigree, and are common to many of the spiritual traditions of the world. Likewise, they may form an important part of a transformative Integral Yoga practice.

How does it work?

Meditation upon and repetition of a mantra or Divine name works by focusing and concentrating the mind and heart of the aspirant on the underlying spiritual force or reality which has inspired the mantra. It is a way to tune the heart and mind away from the ordinary objects of its attention, focusing them instead towards the Divine. It thus may also act as a protection or armor from negative thoughts and emotions. It facilitates the increase of aspiration and devotion, and improves the receptivity to higher states of consciousness and being.

Ancient mantras like oṃ are charged like spiritual batteries by millenia of use by saints and sages. A mantra received by a teacher or guru may also be charged and carry the realization of the teacher or the teacher’s spiritual tradition. Inspired lines from spiritual texts like the ṛg-veda, upaniṣad, or Savitri can convey sublime truths to the consciousness through the power of their intuitive rhythm and poetic beauty.

“OM is the mantra, the expressive sound-symbol of the Brahman Consciousness in its four domains from the Turiya to the external or material plane. The function of a mantra is to create vibrations in the inner consciousness that will prepare it for the realisation of what the mantra symbolises and is supposed indeed to carry within itself. The mantra OM should therefore lead towards the opening of the consciousness to the sight and feeling of the One Consciousness in all material things, in the inner being and in the supraphysical worlds, in the causal plane above now superconscient to us and, finally, the supreme liberated transcendence above all cosmic existence.”

Which mantra is the best to use?

The ideal mantra is one which is received from within or arises spontaneously in the mind or consciousness. These are best since they vibrate in tune to one’s own deepest aspiration and nature. The next best mantra is the one received from one’s mentor, teacher, or guru (गुरु). Lastly, if one is not able to acquire a mantra by either of these two means, one may use a common mantra like oṃ or one found in a book of guidance or spiritual teaching. In the Integral Yoga of Sri Aurobindo, common mantras are oṃ, the names mā (मां), “Mother” or “Lord”, and oṃ namo bhagavate (ॐ नमो भगवते) which was a mantra used by the Mother herself.

“A mantra given by a guru is only the power to realise the experience of the discoverer of the mantra. The power is automatically there, because the sound contains the experience. I saw that once in Paris, at a time when I knew nothing of India, absolutely nothing, only the usual nonsense. I didn’t even know what a mantra was. I had gone to a lecture given by some fellow who was supposed to have practiced “yoga” for a year in the Himalayas and recounted his experience. All at once, in the course of his lecture, he uttered the sound OM. And I saw the entire room suddenly fill with light, a golden, vibrating light… I was probably the only one to notice it. I said to myself, “Well!” Then I didn’t give it any more thought, I forgot about the story. But as it happened, the experience recurred in two or three different countries, with different people, and every time there was the sound OM, I would suddenly see the place fill with that same light. So I understood. That sound contains the vibrations of thousands and thousands of years of spiritual aspiration – there is in it the entire aspiration of men towards the Supreme. And the power is automatically there, because the experience is there.“

How to practice mantra chanting or japa?

Japa can be either practiced aloud when one is alone, together when practicing collective chanting, or internally in the mind. When uttered aloud, the mantra may have a special effect on the physical body, but otherwise japa is equally effective whether uttered aloud or in the mind only. Internal japa has the added benefit that one can practice it throughout one’s daily life in all cases, environments and social contexts.

Japa is commonly practiced in daily dedicated sessions of meditation, often with the help of prayer beads or mālā (माला), but over time the subconscious mind takes up the practice and it goes on even when one is not meditating and is occupied with work or other activities. It is often recommended to repeat the mantra during moments of stress, crisis or danger, for special protection and the regaining of one’s internal balance and poise.

When repeating the mantra, one should concentrate in one’s heart in a devotion or aspiration to the Divine, or otherwise turn the being upwards to concentrate the mind on the spiritual truth and reality behind the mantra. Mechanical repetition without feeling or intention should be avoided as it has limited efficacy.

Nama Japa in the Yoga of Transformation by Sri Ramakrishna Das – Translated and revised from the original Oriya text, this book is a passionate argument for the effectiveness of nama-japa in Sri Aurobindo’s yoga. The author’s premise is that through all the difficulties and arduous trials of the yoga of transformation, the safest and least difficult path is that of complete surrender to the Mother, and that the most direct way to achieve such a surrender is by the constant repetition of the Mother’s name. In concise and affirming language, he describes how to use nama-japa in work, in worldly life, to overcome obstacles from within and attacks from adverse forces, and how to make its practice natural, spontaneous, and effective.

Mantra: Rhythmic Word of the Infinite – Excerpts on Mantra and Japa from the writings of Sri Aurobindo and the Mother, compiled by Dr. Alok Pandey.

“The Word has power—even the ordinary written word has a power. If it is an inspired word it has still more power. What kind of power or power for what depends on the nature of the inspiration and the theme and the part of the being it touches. If it is the Word itself,—as in certain utterances of the great Scriptures—Veda, Upanishads, Gita,—it may well have a power to awaken a spiritual impulse, an uplifting, even certain kinds of realisation. To say that it cannot contradicts spiritual experience.

The Vedic poets regarded their poetry as mantras, they were the vehicles of their own realisations and could become vehicles of realisation for others. Naturally, these mostly would be illuminations, not the settled and permanent realisation that is the goal of Yoga—but they could be steps on the way or at least lights on the way. Many have such illuminations, even initial realisations while meditating on verses of the Upanishads or the Gita. Anything that carries the Word, the Light in it, spoken or written, can light this fire within, open a sky, as it were, bring the effective vision of which the Word is the body. In all ages spiritual seekers have expressed their aspirations or their experiences in poetry or inspired language and it has helped themselves and others.“

2 thoughts on “Mantra and Japa in the Yoga of Transformation”