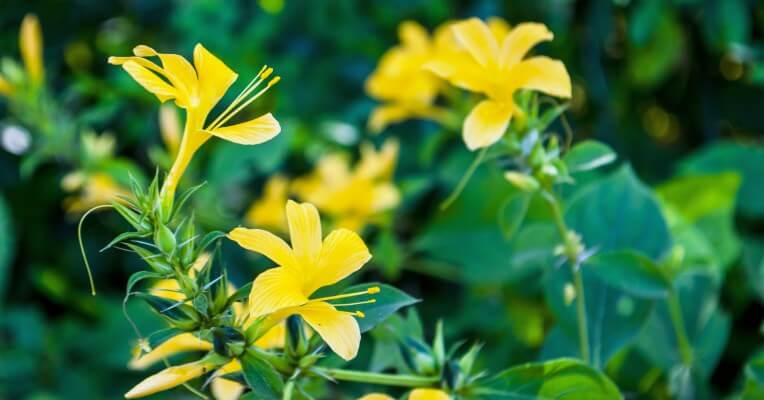 Barleria prionitis, also known as “Porcupine Flower”, is an important Ayurvedic herb for dental care, while also having other medicinal properties as well. Its name in Sanskrit is vajradanti or वज्रदन्ती (vajra meaning “diamond” and danti meaning “toothed” or “tusked”), which points both to its herbal use in Ayurvedic dental care as well its very sharp spines which are likened to diamond tusks!

It is a small spiny shrub native to India, being commonly grown in gardens for its attractive yellow flowers. Its leaves and bark are the parts of the plant most often used in herbal applications, either in juice, paste, decoction or extract form. The leaves and bark are astringent and diuretic, being very high in Potassium, and according to Ayurveda, they also have the beneficial property of reducing or pacifying excess kapha.

Among Vajradanti’s many different herbal applications, it is most often used in Ayurvedic herbal formulas for general pain relief and reducing inflammation and swelling. Here it stands out among other herbs of the same kind in its specific action on the teeth and gums, being commonly cited for toothache relief due to various causes and for bleeding or disease of the gums.

Modern research is also investigating the anti-microbial properties of Barleria prionitis and its efficacy in reducing the buildup of oral plaque, and has found it to be “statistically equally effective against dental plaque” in comparison to the “gold standard” of Mouthwash.

Being held in such high regard in Ayurveda for promoting oral health (and diamond-like teeth!), Vajradanti naturally finds its place among other important herbs in Auromere’s high-quality dental care formulations, including all varieties of Auromere Ayurvedic Herbal Toothpaste and Auromere Ayurvedic Mouthwash.

***With all best wishes for your health and wellness from Auromere***