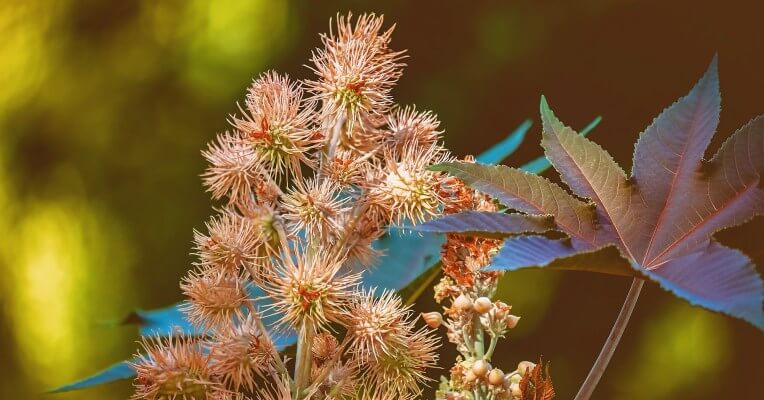 Castor oil is an important Ayurvedic ingredient with many beneficial properties, and is made from the pressed seeds or “beans” of the Ricinus communis plant native to India, East Africa and the Mediterranean Basin. Today the Castor oil plant is widespread throughout the world and prized for its many ornamental, commercial, and natural healing properties.

Ornamentally, the plant is grown in gardens for its distinctive and attractive, tropical-looking foliage and its showy, bright red flower spikes. Industrially, castor oil is used as a natural additive to food to prevent molding and spoilage, as an industrial lubricant, and as an excellent source of biodiesel. In natural or herbal medicine, the use of castor oil goes back thousands of years, especially in the places of its natural habitat like India and Egypt. (Castor oil is mentioned in ancient medical texts from Egypt, such as the Ebers Papyrus, written more than 3500 years ago!)

In Ayurvedic medicine, castor oil (known as eraṇḍa in Sanskrit) is considered to be balancing to both the vāta and kapha doshas. It is considered to be hot and penetrating in potency (uṣṇa & tīkṣṇa). It also belongs to the rejuvenative, anti-aging class of herbs known as rasāyana.

Chemically, the main component of castor oil is ricinoleic acid (about 90%), which has natural pain-relieving and anti-inflammatory properties. High in Vitamin E and Omega fatty acids, castor oil is deeply moisturizing, nourishing and protective to the skin and hair. Castor oil has strong antimicrobial properties, which is why it is often used to prevent spoilage of food, and is also an extremely effective and natural purgative when taken internally.

Being a natural purgative, castor oil is very helpful in treating constipation and is the main ingredient in Ayurvedic purgative therapy (virecana), one of the five detoxing therapies of the Ayurvedic restorative practice, pancakarma.

By that same quality, it is often prescribed and used to initiate or induce child labor in full-term, expectant mothers. This use of castor oil goes back many thousands of years!

As castor oil is a strong and effective medicine, it should be taken internally only under supervision of your Ayurvedic or medical health practitioner.

Being deeply moisturizing, castor oil is often included in body care products (both modern and ancient!) for the skin and hair, such as Ayurvedic soaps, lotions and hair oils. It is also an integral hydrating component of many modern cosmetics.

As castor oil also has strong anti-microbial and anti-inflammatory properties, it is often traditionally prescribed in Ayurveda for problem skin and hair conditions like acne, dandruff & psoriasis, and for the healing of external wounds. Modern medical ointments for wounds and sores also often contain castor oil.

Castor oil is also often included in medicinal liniments or massage oil formulas, helping to relieve inflammation and joint pain associated with conditions like tendonitis or rheumatoid arthritis. This is partly due to its hot and penetrating qualities which help to increase circulation and remove stagnation.

In keeping with its prized position in Ayurvedic herbal medicine, and with its abundant beneficial properties as described above, many of Auromère’s Ayurvedic body care products contain castor oil, including our massage oil, hand & body lotion, shampoo bar, pre-shampoo conditioner, and all of our soaps! If you haven’t used these Ayurvedic products before, consider trying them out and availing of all the wonderful benefits of the ancient castor plant!

With all best wishes to your health and wellness from Auromère